Sam Cohen of Joey Corp. and Scott Gandy of Kempsville Building Materials teamed up last year to build a very special house at the 2019 Homearama: the Coastal Virginia Building Industry Association Scholarship House.  Upon the home’s recent sale, they donated $17,000 to the CVBIA Scholarship Foundation.

“It had been eight years since a Scholarship House was built and since the market had started to recover, I thought it was important that we bring back an annual tradition that began in 1966,” said Gandy, who served as the association president in 2018.

Gandy reached out to Carter Lumber, Kempsville’s parent company, for support.  He then called Cohen, a custom builder and also a past association president.  “Sam is a veteran Homearama builder who constructs a top-notch home,” said Gandy.  “He did not hesitate one second when I asked him to build the Scholarship House.”

The Scholarship House, named The Grayton Downes, was one of two homes Cohen built at last year’s Homearama, which was held at Culpepper Landing in Chesapeake.  “I really liked the idea of having the Scholarship House on display at Homearama so the community could learn about the great work the foundation has done over the years,” said Cohen, who has built in the annual showcase event since 1997.

His house is one of just two that have been showcased as part of the Homearama event.  Other Scholarship Houses were typically constructed in whatever community the builder was active in at the time.

“What really makes the Scholarship House special is that it’s a collaborative effort between the builder and the many trades people and suppliers involved in the construction process,” Cohen explained.  “Without the generous support from companies like Carter Lumber and Kempsville Building Materials, it would be difficult to make a meaningful contribution.”

According to Fred Napolitano II, Scholarship Foundation chair, the foundation has awarded 463 scholarships and more than $1.8 million since it was formed in 1965.  The majority of its funding over the years has come from Scholarship House contributions.

“Although the foundation continued to award scholarships during the Great Recession years, it really means a lot to have members like Scott and Sam step forward to inject some capital, making it stronger and more capable of continuing to provide local students with the assistance they need to continue their educations,” Napolitano said.

Earlier this year, seven local high school students were each awarded a $5,000 academic scholarship to be used at the four-year college or university of their choice,” he said.  “Unfortunately, because of school closings due to the pandemic, we had to suspend the other foundation program – the Young Designers’ Scholarship Competition -- which awards $5,000 annually to the winning house design entries.  But it will be back in 2021!”

With the merger earlier this year of Tidewater Builders Association and the Peninsula Housing & Builders Association into Coastal Virginia Building Industry Association, the Foundation has expanded its reach to include all cities and counties in southeastern Virginia, from Williamsburg to the Eastern Shore of Virginia and west to Isle of Wight County. 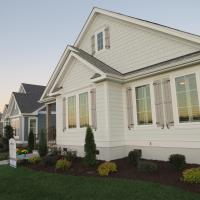